Receive notification of new arrivals in your topics of interest. 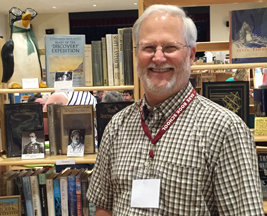 David Spilman Fine Books, ABAA is an online business specializing in fine and rare books and publications related to exploration, adventure and world history, with an emphasis on the Polar Regions, History and the American west.  David’s particular interest is in the Heroic Age of Antarctic exploration from 1895 to 1920’s.  Another area of interest is in the American western expansion and the Gold Rush eras.  He also has a curiosity and interest on just about any subject.

David has collected books for many years and started developing his bookselling business in 2009 and became active in 2012.  After attending the Colorado Antiquarian Book Seminar in 2010 (CABS, also known as “booksellers boot camp”), he built his inventory established a business presence in 2012, set up this website and began showing at Book Fairs in early 2015.  Also, he has attended courses at Rare Book Schools at the University of Virginia and University of California to develop his continuing education.

In July, 2018, he was elected a member of the Antiquarian Bookseller's Association of America (ABAA).  David is also a member, and currently serving a second term as Treasurer, of the Independent Online Booksellers Association (IOBA). He strongly supports the professional development and code of ethics ABAA and IOBA.  To be successful in the services booksellers provide to the public, there must be a high standard of competency and professional ethics that ABAA and IOBA support and promote.

Other memberships are in the Rare Books and Manuscripts Section (RBMS) of the Association of College and Research Libraries Division (ACRL) of the American Library Association (ALA).  This section brings together collectors, booksellers, researchers and librarians to promote awareness of special collections and the handling of rare books and manuscripts.  And he is a long standing member of the Book Club of California, based in San Francisco, that has been promoting and publishing books since 1912.

In his other non-bookseller life, David has a master's degree in Public Administration from the University of Southern California and retired from a long and successful career as a finance director and administrator for several cities in California.  David lives in northern California in the wine country of west Sonoma County.  David and his wife Donna have a small farm and enjoy raising registered Shetland sheep for their high quality wool.  He is currently or has served his community on the boards of a non-profit agency that develops affordable housing in Northern California, Rebuilding Together, Junior Achievement and local environmental groups.